AI-powered IT support with Moveworks in Microsoft Teams: now on AppSource

This post is originally published on Microsoft Teams Blog articles

Microsoft Teams is excited to announce that AppSource now includes Moveworks, the world-leader in AI-powered IT support.

Moveworks is a conversational AI chatbot that allows employees to resolve their tech issues directly in Teams, instantly and autonomously, with no involvement from your IT team. Unlike conventional chatbots, Moveworks leverages advanced natural language understanding, or NLU, to determine exactly what employees are requesting—no matter how they phrase those requests.

“By helping to quickly resolve employees’ IT issues within Microsoft Teams, Moveworks allows companies to work faster. And in a world that now relies on technology to collaborate, it’s never been more critical to provide real-time, location-agnostic tech help.”

Behind the scenes, Moveworks takes action and retrieves knowledge by integrating with other enterprise systems, such as Active Directory, SharePoint, and Microsoft 365. These deep integrations enable the Moveworks bot to deliver end-to-end resolution for a wide range of IT issues: 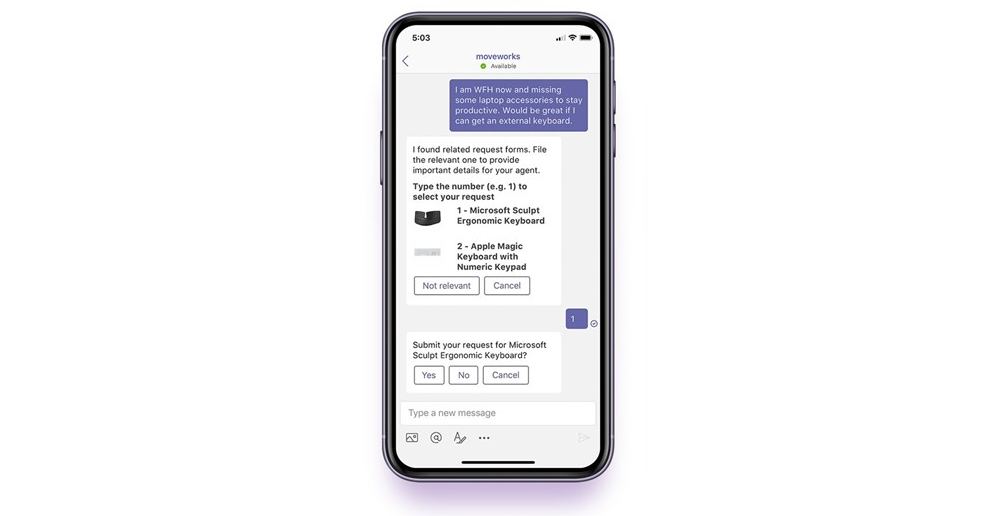 Before Moveworks became available on AppSource, fully deploying the bot still took just eight weeks. But by downloading Moveworks at the click of a button, you can shrink that time-to-value even further—thanks to these added capabilities:

For enterprise Teams customers like Equinix, Moveworks has significantly enhanced the Teams platform in two distinct ways. First, Moveworks allows Equinix employees already using Teams to fix their tech problems—from accessing software to editing email lists to unlocking accounts—via quick, painless conversations with the AI chatbot. And second, Moveworks intercepts IT issues submitted through other channels and then resolves those issues on Teams, bringing new users to the platform. 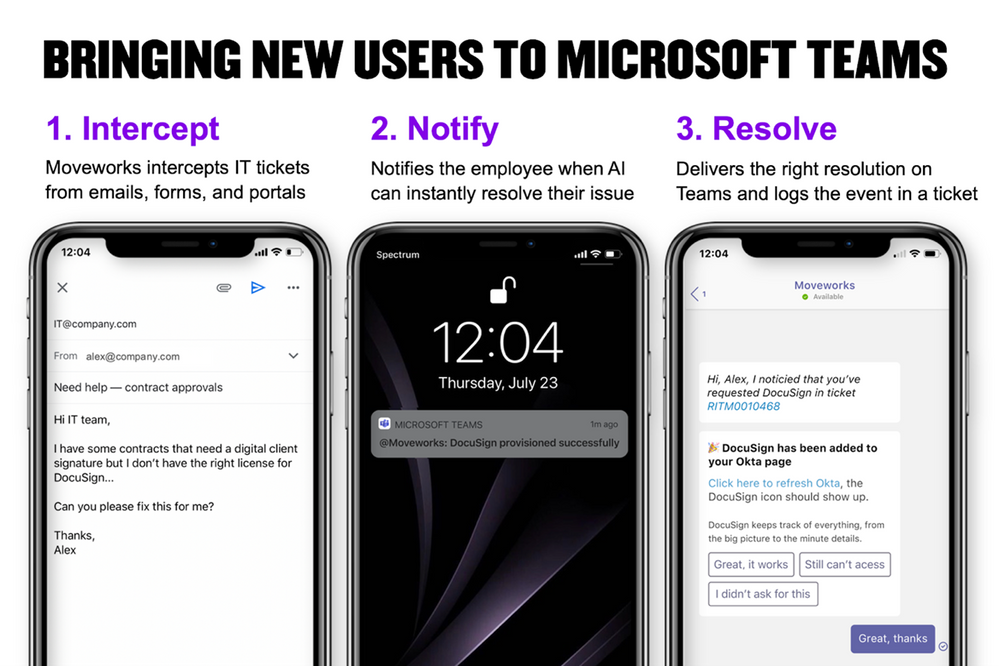 Reimagining your virtual workplace
Particularly in this new normal of remote work, the ability to remain productive anywhere and anytime defines successful employees. But without a physical office or access to in-person help, these employees often don’t know where to find critical resources.

With Microsoft Teams, however, every key team member, workflow, and file is consolidated in a single place. And by adding Moveworks to Teams, getting IT support is just as simple.

“Microsoft Teams is a powerful platform, and Moveworks makes it even more valuable. It’s a symbiotic relationship.”